Burglary Prevention Through Use of Window & Door Restrictors

An overview of burglary and other household theft in England and Wales, by LockLatch Limited

Feeling  safe and being safe in your own home are two completely different things, and two important aspects of home security. Feeling safe means you’re emotionally secure in the dwelling, whether you’re alone or with your family. However, although you’re feeling safe you might not actually be safe. It’s likely that you have one or two of your windows or doors open to let fresh air in or to allow your pets to move freely in and out of your home. Without security measures like window or door restrictors in place though, this could potentially leave you vulnerable and could mean the difference between feeling safe and actually being safe.

The office for National Statistics continuously conducts annual surveys in communities to shed some light about criminal activity in these areas, with the most recent findings published in July 2017.

With updated results, security service providers and product providers like LockLatch can gain insight into crime trends and adapt offerings to coincide with these findings.

We associate burglary with the stealing of possessions. However, burglary, by definition, is the illegal entering of premises with criminal intent, which is where the theft comes in. So by law if you find someone inside your home or office that you know is not supposed to be there you’re in full right to have them arrested (whether they’ve taken anything or not).

Whether they come in through the windows, the front door or even through the ceiling, it’s a crime that needs to be prevented.

Let the stats speak for themselves

It’s documented that in the 80’s and 90’s there was a sharp increase in home burglaries within these communities. According to the national archives, this was largely due to the rise of drugs in the area, with a particular focus on urban dwellings rather than rural ones. 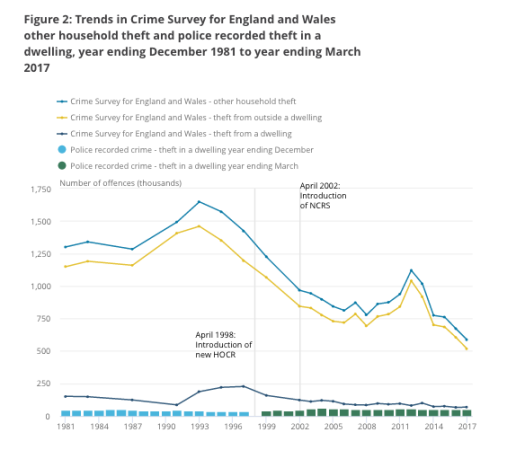 However, when the 2000’s rolled around, burglary stats started to level out and eventually went into decline around 2011.

Well, people started taking preventative measures, by installing better security systems. The Crime Survey for England and Wales findings are an interesting insight into how potential victims are being proactive against criminals. Things like LockLatch door restrictors and window restrictors came onto the market, empowering home owners to have affordable security measures in place to add additional layers of security around the house and garden. Finally, being safe and feeling safe was easily attainable.

Who is at risk?

The truth is, anyone is at risk.

In over half of the recorded incidents, someone was home at the time of the burglary. Remember when we talked about feeling and being safe are two different things?

The survey results show that the main people at risk are –

However, it’s certainly not restricted to those groups and it also doesn’t mean that you should be boarded up inside your home with no fresh air. That’s why, with window and door restrictors, you can reduce your chances of becoming a victim.

Burglary Prevention is Better than Cure

These instances can be prevented. As the saying goes, the best indication of future behaviour is past behaviour. So, in line with the survey and police reports, there’s a common thread of documented circumstances that are  noted and can help in burglary prevention:

1. 70% of perpetrators gained entry through doors, the remaining 30% was through windows

LockLatch door restrictors and window restrictors enable you to leave openings ajar but locked to ensure that they can’t be opened. Window and door restrictors are ideal for pets, burglary prevention, preventing children falling from upstairs windows and balconies, letting in fresh air and preventing wind damage from slamming windows or doors.

2. Purses, wallets, jewellery and electronic devices, like tablets or laptops are among the top items taken.

These are quick-to-grab items that perpetrators can quickly and easily carry away. Additionally, many of these possessions are left lying around on tables or other easily accessible areas of the home.

As majority of adults have full-time jobs during the week, it’s easy to see why this statistic rings true. On the other hand, weekend burglaries can also be attributed to security negligence, as we feel safer when we’re at home.

4. Two fifths of burglaries take place in the morning, while the remaining three fifths happen in the evenings

While you’re at home, there’s a better chance for small-scale theft and burglary to happen as doors, windows and other easy-access points are more likely to be left open and unlocked and valuable goods left easily accessible.

By keeping up-to-date with informative data  (that’s based on actual occurrences), you can have fundamental insight into what you need to do to not become a statistic.

Unfortunately, crime is a reality that we face on a daily basis. Burglary prevention is key and with the above information, you can have the right precautions in place to ensure that you feel and remain safe.

See how we can help you feel and be safe.

Welcome! We use cookies on our site to improve customer experience. We don't store any personal data that you don't provide.
By using the site you agree to use cookies. You can read more in our privacy policy.